Yasutake Takahiko: The Outline of the New Code and Osaka Prefecture 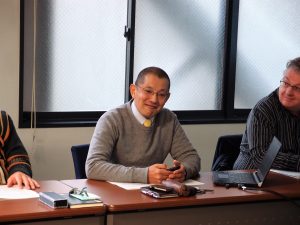 Prof. Yasutake began by introducing the archival materials held at the Osaka District Public Prosecutor’s Office. In 2004, all records made before 1881 (Meiji 14, the year the former Penal Code and Criminal Codes were enacted) were transferred from each district prosecutor’s office to the Tsukuba Annex of the National Archives of Japan. Since 2002, Yasutake has been examining the transformation of criminal law, criminal litigation, and criminal administration in early Meiji-period Osaka. He transcribed the twenty-four volumes of the “Documents of Examination (Sho ginmi sho)” from 1869 (the oldest documents in the Osaka office’s archive) as well as the “Compilation of Criminal Penalty Inquiries” (Keiji oshioki ukagaisho tsuzuri)” from 1869–1872.

Yasutake devoted the core of his presentation to the “Outline of the New Code” (Shinritsu kōryō), which was promulgated in the twelfth month of the third year of Meiji (Jan./Feb. 1871) and enacted uniformly across the country in the seventh month of the following year (Aug./Sept. 1871). He pointed out that the New Code was already being put into partial practice even during its formulation. Responses from the Ministry of Justice (Gyōbushō) to requests for guidance on criminal penalties (issued in the intercalary tenth month of the third year of Meiji, or Nov./Dec. 1870) had started to include the phrase “according to the New Code.” The punishments called for under the laws of the former Tokugawa government—still in effect at this time—were harsher than those in the New Code, and so the Osaka Prefecture Bureau of Prisons, concerned about the disparities that might arise in choosing which code to apply, requested the swift implementation of the new law. In the prefectural officials’ concern with consistency we can glimpse an attitudinal approach that had been developing since the early modern period and might fittingly be termed “practical law”. These sorts of back-and-forth exchanges between the prefectural office and the central government are a phenomenon unique to the Tokugawa-Meiji transition. 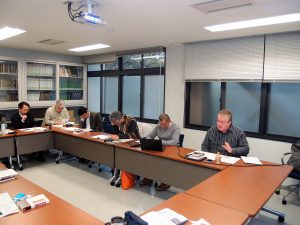 Prof. Amos examined how Edo-period “status law” (mibunhō) which was enacted in the Edo Period, was practiced in the Meiji Period. The defining characteristics of law in the Edo period lay in the principle of differential treatment and punishment (according to status) and the parallel existence of each status group’s internal laws. In the first half of the presentation, Amos used early Meiji-period court records from Osaka to look at how status law was handled and infractions thereof punished. Examining the cases of people punished for violations of status law in the Sho ginmi sho for the second year of Meiji (1869)—for example, “commoner wearing sword” or “priest wearing haori and hakama with the two swords”—reveals a trend of people in the Edo-Meiji transition period seeking to elevate their social status in order to gain some benefit. In the second half of the presentation, Amos examined legal debates and judgments by court officials that involved handling the “local governing practices” (genkyokuteki shihai) that had carried over from the Edo period, that is, how problems relating to early modern customs of self-governance (jichi) were dealt with amidst the push to nationalize and universalize the law. Reading through the 1869 Sho ginmi sho and the 1870 Keiji oshioki ukagaisho tsuzuri for cases involving groups that had been permitted a degree of self-governance, especially cases in which their authority and rights were in question, revealed instances of highly involved debate between criminal law officials in the Osaka and central governments over the permissibility of these regionally variegated status groups’ established customs of self-governance. To conclude, Amos noted how examining punishments offers a window onto the historical nexus of law and society in Osaka, and how investigating these situations, in which the contradictions engendered by the overlap of modern law and status law came to a head, allows us to reflect concretely on the meaning of both modernity and early modernity.

The questions to Prof. Yasutake revolved around the nature and interpretation of a primary source titled “Matsudai bayashi,” which contained annotated prison scenes; the historical background and significance of the introduction of the modern system of penal servitude; and meaning of early-Meiji comparisons of contemporary Chinese and Western laws. Prof. Amos fielded questions pertaining to the specifics, significance, and possibilities of the concept of “local governing practices”; the possibilities for elevating one’s status in the early-modern-modern transition period in Japan and in comparison to the situation in other countries. By examining social conditions in a transitional period characterized by the overlap of status law and modern law, Yasutake and Amos demonstrated the utility of the “law and society” perspective for exploring the history of marginalized social groups and urban social formations in both the early modern and modern periods.