Presenter: Zhang Zhihui (Assistant Professor, Department of History, Graduate School of Arts, Shanghai University), who is a collaborator our project, gave a presentation about her research. 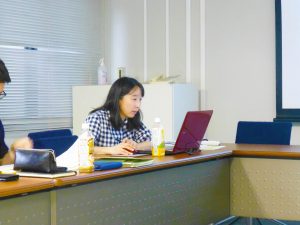 Housing for Japanese residents in the Shanghai International Settlement had serious problems: high rents and layouts not amenable to Japanese tastes combined with steady growth in the number of Japanese residents to cause chronic housing shortages. To resolve “the housing problem”, the East Asia Industrial Co. (Tōa kōgyō kabushiki gaisha) established a Shanghai office, through which the company invested in land in Shanghai and provided loans for real estate investments made by residents and Japanese companies. Japan was eagerly negotiating for the acquisition of a large plot of land put up for sale by one Mr. Ezra, a British Jew, but this failed. Various opinions about land investment were exchanged among Toa Kogyo, the Consul-General of Japan in Shanghai, and the Ministry of Foreign Affairs. Most prominent were those that saw the purpose of obtaining real estate to be, besides securing the housing supply, acquiring the right to vote for Shanghai city council members. Toa Kogyo’s investments alleviated the housing shortage facing Japanese residents to some extent, increased their political power within the International Settlement, and promoted the formation of the Japanese community in Shanghai. On the other hand, however, the rise of land prices and rents limited the effect of these efforts and, moreover, contributed to the worsening of Chinese-Japanese relations.

First, we went over the administrative and spatial organization of the Shanghai International Settlement. The settlement was governed by the Shanghai Municipal Council, an elected body of nine councilors. The franchise belonged only to owners of high-value land, about two thousand in all. Some of the three-story housing was illegally constructed (but tacitly permitted), so often effective responses could not be mounted to fires, etc.

Next, there was a question about what “the housing problem” meant in concrete terms. According to Zhang, it indicated a social problem (of insecure/insufficient housing for Japanese residents in the settlement), which was simultaneously bound up with the political problem of securing voting rights. In response to this, it was suggested that there was a need to go beyond simply separating the social problem out for juxtaposition with the political problem, by examining residents’ various social situations and positions so as to establish the structure of the social formation in the settlement. In connection with this, there was an opinion that political issues were related to the interests of upper-class residents (employees of large companies, etc.) and the Japanese government, so further research was needed to explore their reality as distinct from that of lower-class residents.

Additional comments were as follows: regarding the land purchase negotiations with Ezra, it remained to be established whether there really had been a possibility of the land’s being sold to Japan; a question as to what kinds/methods of land investment Japan pursued in Shanghai and whether were similar to those of European powers in the late nineteenth century.