The chief of the overseas co-investigators in our project, Daniel Botsman (Professor, Department of History, Yale University), gave a presentation analyzing the the planned 150th anniversary of the Meiji Restoration, discussing the role and significance of historical research for the event. 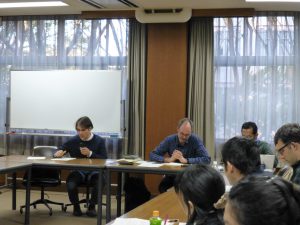 In the 1968 commemorations of the centenary of the Meiji Restoration, the Japanese government attempted to link the event to policies exalting patriotism, amending the constitution, and rearming the nation. This initiative failed in the face of trenchant criticism from historians of the time. Now that commemorative events are once again being planned, this time for the 150th anniversary of the Meiji Restoration, these issues are as important as ever. What stance should historians take to the government’s plans for marking the 150th anniversary?
Firstly, it is important to draw a very clear line separating the view of “Meiji” as a “successful example of modernization” in general, and the actual historical processes that were at work. The government does not want to go anywhere near the revolutionary struggles of the people, and so they use vague, valorizing phrases like “the spirit of Meiji.” While historians have increasingly adopted a skeptical view of revolution since the downfall of the Soviet Union, it is still important as such to think through the nature of revolution and its social and historical significance. The government is depicting the Meiji Restoration as a change brought about through “the leadership of great men” and so avoiding any mention whatsoever of the most fundamental of its characteristics—the rise of national militarism and the subsequent history of war. In order to discover the true legacy of the Meiji period, attention needs to be paid to how a diverse range of people lived through this age of change. The study of social history, which has progressed in Japan, offers an effective means of doing this. Unlike the case with the “modernization theory” prevalent at the Meiji centenary, today we hear ever more voices casting doubt on the American system of values, indeed from within America itself, also. Rather than indulging in a celebration of a simplified past, we all stand to gain more by questioning the past in a thoughtful way.

John Porter (Lecturer, Institute of Japan Studies, Tokyo University of Foreign Studies), a member of the project, gave comments as a guest speaker.

One of the opinions expressed was that today’s researchers need to ask how they are to face the worldwide wave of neoliberalism; for example, one of the ways in which historians could fulfill their social responsibility and play a concrete role might be by doing comparative research on the nature of societies and the ways in which source materials survive.

After a break, a presentation was given by Masayuki Ueno (Associate Professor, Graduate School of Literature and Human Sciences, Osaka City University), a junior researcher who would be provided with an opportunity to conduct research at Yale University. The presentation outlined his previous research and ongoing project. 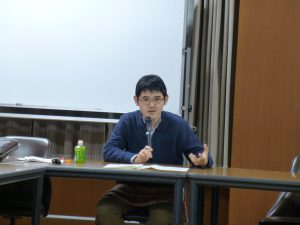 Ottoman society is characterized by segmentation based on religious affiliation. Within this society, non-Muslims (Christians and Jews) were marginalized and faced a wide range of restrictions. Ueno has been engaged in the study of these marginalized groups to deepen the understanding of the configuration of this multireligious entity.
In his talk, Ueno discussed the shift in the Ottoman Empire’s approach to non-Muslim subjects in the mid-nineteenth century and the following negotiations between high-ranking state officials and non-Muslims. He centers the experiences of Christian Armenians, the second largest non-Muslim group of the empire, to discuss three main arguments. First, the shift in the empire’s treatment brought to the fore the idea that the government should not interfere in the religious affairs of non-Muslims. Second, this made the rhetoric of religion the strategy to protect the scope of communal sphere of activity for non-Muslims. Third, non-Muslims sometimes demanded special treatment for their religious affairs based on the particularity of each religion and denomination, and other times, they demanded the equal treatment with other religious groups.

Apart from specific questions on the contents of the presentation points were made linking Ottoman Christians with the global power of modern imperialism. The opinion was also given that the modernization of Ottoman society can be understood as a transition process from a concept of religion as a thing in itself to an awareness of it as being-for-others.