Sachiko Hitomi (Associate Professor, Kindai University), who is a co-investigator in our project, gave a presentation about her research. This was also her rehearsal of the presentation that she would give at Yale University on March 19, 2018. 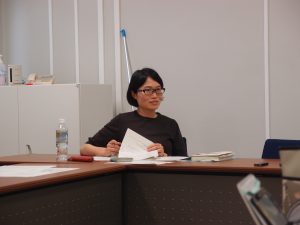 Hitomi focused on the conflict among Tsuru, ex-prostitute of the Fukuhara Brothel, Shinbē, her Hitonushi (guarantor), and Gikai, a Chinese resident of Kobe who redeemed her. Hitomi analyzed the series of documents classified under the title “a case of a prostitute in the Fukuhara Brothel vs. a Chinaman” in the archival collection “the Documents on the Opening of the Port of Kobe.”

From the analysis of a petition that Shinbē submitted to the Office of Foreign Affairs to demand Tsuru’s return from Gikai in 1870 (Meiji 3), Hitomi examined the development of the case, the activities of Chinese residents of the residential area for foreigners in Kobe after the opening of the port, and the oppressive circumstances in which Tsuru found herself. Then she exemplified the situation of concubines of foreign residents immediately before the issuance of the Emancipation Edict for Female Performers and Prostitutes.

Next, through the analysis of the other documents about the case, Hitomi investigated the contract about the redemption of Tsuru in 1869 (Meiji 2), and the contents of the out-of-court settlement between Gikai and Shinbē in the next year. Moreover, through the analysis of the ordinances regarding concubines of foreigners issued in later years, she examined the position of the Fukuhara Brothel, difference in the legal categories of “servants” and “concubines,” and the strengthening control over concubines of foreigners by the administration. 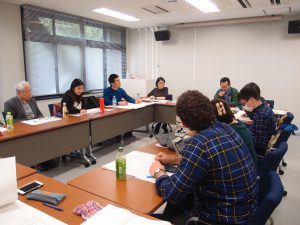 There was a discussion about the interpretation of the document. Reading the whole petition, the participants could find that there was a gap between Shinbē and Gikai about the understanding of former’s debt and the ransom paid for Tsuru. A participant pointed out that documents about concubines for foreigners survived in Nagasaki, where numerous foreigners lived since the early modern period, and that these documents demonstrated the existence of foreigners who possessed financial strength. The participants discussed how they should understand the legal category “women who practice prostitution by their own will” in the Emancipation Edict for Female Performers and Prostitutes. They exchanged views about the edict, mentioning that although the emergence of a formal procedure by the edict might have had a positive aspect, the actual situation after the issuance was far from the emancipation of prostitutes, and that researchers should be cautious in their assessment and description of the dual aspects of the edict.