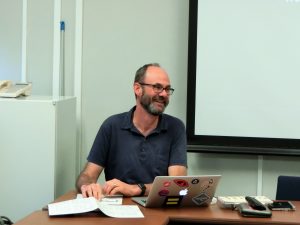 Asakawa Kan’ichi became a professor at Yale University and played a key role in introducing the history of Japan to the world in the period before World War II. There is, however, a notable gap between Japan and America in awareness of his contributions. He was not well-known in the United States, but attracted the attention of prewar Japanese elites and in some respects was exploited by conservative interests after the war. While we must therefore be judicious when discussing Asakawa himself, his efforts at collecting historical materials deserve celebration and it is necessary to accord them the true measure of their historical significance.

One of Asakawa’s most important achievements was the collection of remarkable historical documents he assembled, including the Kyoto Komonjo, which is now preserved in the Beinecke Rare Book and Manuscripts Library at Yale University. To this day, his collection is helping students learn how to use archives. However, undergraduate students tend to be more interested in Asakawa’s life and career, such as his efforts to prevent the war, rather than the historical documents he collected. Examining the correspondence between Asakawa and L. Warner, who likewise sought to avert war, we find that both men were dedicated to a sober style of research grounded in archival sources, Asakawa in the Iriki monjo and Warner engravings from the reign of Emperor Suiko. As of late sources such as these receive little attention and funding for research. However, it was precisely because of their connection as researchers that Warner and Asakawa worked together to try to prevent war between Japan and the US. Few politicians actually heeded their advice, but if they had, Japan and the United States would have had a very different history. 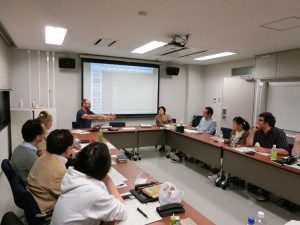 The first question was about Asakawa’s career at Yale University. Asakawa was hired to teach Japanese history, but was not able to attract students to his class, so he taught the history of medieval Europe while working to gather Japanese historical documents and delving into the Iriki monjo. The next question was how much influence Asakawa had as a researcher. Although his abilities as a researcher were outstanding, on the whole he was ignored in American academia. He had his greatest influence as a sort of portal for spreading knowledge of Japanese culture and was not able to train a generation of researchers to succeed him. However, he also maintained extensive correspondence with leading figures of the Annales School and in fact, in Botsman’s view, had a good deal of influence on other scholars.

It was also noted that, from present perspectives, Asakawa tends to receive scholarly attention as a part of the Japanese elite, but to evaluate his contributions accurately we need to consider him in the context of the society and academia of his time. A participant commented that in evaluating Asakawa’s collection we need also to consider it not only in terms of the value of the documents it contains, but place it in historical context as a source unto itself for thinking about how and why archives were assembled at the time, especially given the collection’s significance overseas as a pedagogical tool.