The eleventh workshop of our project was held at Osaka City University, from 3:00pm to 6:00pm on Thursday, November 1, 2018. 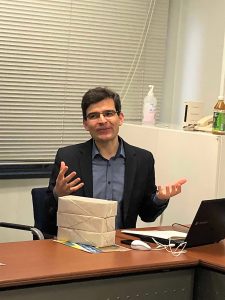 The presentation offered a reconsideration of the conventional understanding that rural commoner’s family lineages (ie) emerged in Japan’s early modern period and that their perpetuation across generations became a general cultural aspiration from about the end of the seventeenth century. By compiling a database of household membership (using approximately three thousand religious and population registers from about a thousand villages in eastern Japan), Drixler found that it is necessary to supplement this historical picture with an analysis of the “umbrella households” (yasikichi kyōjū shūdan) that were common in the first half of the early modern period. Within each locality examined, once such composite households began to decline in number they did so rapidly (generally over a period of ten to twenty years) and eventually disappeared, but by looking at eastern Japan as a whole Drixler found that this phenomenon of decline moved slowly north through the region, like a front, over about two hundred years beginning in the Kambun period (1661-1673). Thus he was able to ascertain that in eastern Japan the kind of parent+single heir “stem families” (chokkei kazoku) necessary to perpetuate the ie gradually increased in number over the century between the Kanbun and Meiwa (1764-1772) periods, observing the regional differences in household living arrangements at each sample time. These variations were consistent with a hypothesis that family types were chosen by values ​​rather than environmental conditions.

Next, shifting to an analysis of ancestor worship, Drixler was able to observe regional differences in the spread of the funerary Buddhism by counting deaths using tombstones and necrologies to compile a dataset on the spread of households practicing funerary Buddhism. As a result, we can see how ie consciousness did not spread rapidly, but rather as a gradual phenomenon. However, we must also note that there was a limit to the diffusion of ie consciousness, with significant numbers of people not preferring stem family succession even in the late Edo and early Meiji periods. 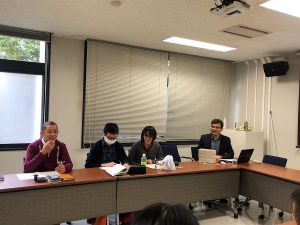 The first question was what an “umbrella household” is. Drixler said that a typical example would be a wealthy stem family and its servants living in the same compound. The next question regarded what differentiates nuclear and stem families. Drixler answered that those households he categorized as nuclear might actually include stem families because his analysis captured only a “snapshot” of the family structure as it was at the time when each historical document was produced. In response to another question about the circumstances that gave rise to umbrella families, Drixler noted that areas with heavy snowfall or prone to famine tended to have many such families, which might indicate that they chose to live in large numbers for security.

Next there was a question about the significance of the stem family for population dynamics in Japan, given the example of India, where stem families were not maintained and the population did not substantially increase. Drixler said that in Japan once people opted for stem families they avoided having many children and that the period of stagnant population growth in early modern Japan coincided with the period in which people developed the preference for stem families. In addition, some participants pointed out that in urban areas such as Osaka there were many people lived alone, had no property, and could not establish ie, and that when thinking about living arrangements the question of each household’s sectarian affiliation might be an important factor.