Presenter: Maren Ehlers (Associate Professor, Department of History, University of North Carolina at Charlotte). Dr. Ehlers, a collaborator on our project, discussed her research for a forthcoming paper. 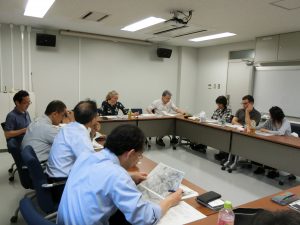 Today’s presentation is a chapter that will appear in the early modern volume of the Cambridge History of Japan (CHJ hereafter), due to be be published in 2020. Working from multiple perspectives, the paper considers the formation, maturation, and dissolution of the early modern status system and social groups from the Toyotomi era through the Meiji Restoration.

In the introduction Ehlers argues for the need to focus on social groups rather than hierarchical order in thinking about early modern Japan’s status system. Section 1 discusses the status groups of Tokugawa society through an analysis of the characteristics of occupational communities, the categories of warrior-officials (shi), commoners (heimin), and “despised” classes (senmin); the place of women, and the role of population registers. Taking the Yokoyama valley in Izumi province as an example, section 2 examines the development of the status system from the Taikō kenchi (Hideyoshi’s late sixteenth-century land survey) through the beginning of the eighteenth century, with a supplementary discussion of the formation of senmin groups in Osaka and other locales. Section 3 argues that the mature status order exhibited both flexibility and fluidity, and began to come apart as the cash economy expanded. Section 4 builds on previous scholarship that has established that the Meiji government was originally planning not to dismantle, but rather reform the status system. Ehlers describes the course of its dissolution, moving from that reformatory background through the subsequent decoupling of status and occupation and the eventual abolition of status privileges. In the final section, she offers the following conclusions: the dismantling of the status order by the Meiji government was a revolutionary transformation. For the government, abolishing status rights provided an opportunity to centralize authority, while for educated elites such as wealthy farmers (gōnō) it was a chance for personal socio-economic advancement (risshin shusse). However, many people faced economic risks due to the loss of privileges. The senmin were formally emancipated with the proclamation of the Outcaste Abolition Edict (senmin haishirei/kaihōrei), but at the same time had to deal with new forms of discrimination and the loss of status rights (which had guaranteed a measure of economic security). As for women, though they were positioned (alongside men) as national subjects, their status within the household and politics was actually reduced.

The first question was about the approach and coverage of the early modern history in the new CHJ. It addresses topics not covered in the previous edition (published over the 1980s and 1990s) such as the environment, technology, and population. Treatment of women’s history in not confined to a separate chapter, but rather woven into the treatment of each theme. All authors devote attention to the theme of social groups. There were then several questions about terminology and expressions. Next, a question was raised about where court nobles (kuge) fit in status society if we hold that its basic categories consisted of samurai, commoners, and outcastes. Ehlers answered that nobles belong to the ruling status groups along with temples and shrines. Also, participants appreciated Ehlers’ observation that, given a “garrison state” that incorporated people into the military system through formally assigned duties/roles (yaku), the practice of delegating those duties (to other actors not of “correct” status)—which arose in the operation and maintenance of the status system—unintentionally sowed the seeds of the system’s dissolution. Finally, in response to a participant’s opinion that it would be going too far to assert that “there was no discrimination” as means of escaping from established narratives of the cruelty of discrimination, Ehlers noted that it would indeed not be appropriate to hold that there was no discrimination (in Tokugawa society); rather we should relativize discrimination, building a clear understanding of what forms of discrimination were applied to which social groups.