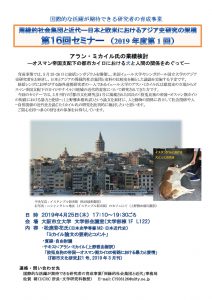 The sixteenth workshop was held at Osaka City University, from 5:10pm to 7:30pm on Thursday, April 25, 2019 in preparation for the project’s General Symposium (May 25-26, 2019), at which Prof. Alan Mikhail of Yale University presented on his research. Mikhail is a leading environmental historian of Ottoman Egypt and a collaborator on the project.

(Graduate Student, Department of Japanese History, Osaka City University), summarized and commented on “A Dog-Eat-Dog Empire: Violence and Affection on the Streets of Ottoman Cairo”, Studies in Urban Cultures 21, 2019 by Prof. Alan Mikhail (translated into Japanese by Ueno Masayuki).

Prof. Alan Mikhail1, ‘A Dog-Eat-Dog Empire: Violence and Affection on the Streets of Ottoman Cairo’—Summary and Commentary

The decades bridging the eighteenth and nineteenth centuries were a period of profound social change in the Ottoman Empire and the world at large. Relationships between humans and animals also changed as part and parcel of that process, yet previous research paid them little serious attention. Mikhail’s article aims to elucidate the effects of those transformations though an examination of the relationships between humans and dogs in Ottoman Cairo. He begins with the problem of dog saliva, elucidating the concepts necessary for understanding Cairo’s canine history through a discussion of hadith (records of the Prophet Muhammad’s words and deeds) and the ritual status of dogs. He then describes the close connection between the city’s dogs and humans—one that was rooted not in affection and emotion as is typical today, but rather in dogs’ usefulness to human society. Next he address the pivot in the relationship brought about by the Napoleonic occupation (from 1798) and the Egyptian authorities’ imposition of new, stronger bureaucratic state in the early nineteenth century, which together led to the expulsion/elimination of dogs from the city. The French army regarded dogs as a danger and a nuisance, and the Egyptian government, informed by concerns with urban hygiene and new sciences of public health, sought to strengthen its control over the populace. At the same time, there came the first signs of the emergence of new, affective relationships between humans and dogs as pets. Ultimately, the enormous transformations that occurred in Egypt around the turn of the century fundamentally altered the human-canine relationship. Whether dog or not, loyalty, allegiance, and obedience were to be directed exclusively to the state. The application of new theories and practices of government to Cairo’s dogs presaged their eventual application to human beings as well.

First, a participant raised the question of whether it is appropriate to speak of “dogs” in general when they appeared in history in multiple guises (hunting dogs, military dogs, strays, pets, etc.). Next, a participant asked the significance of the modernizing reforms and public health efforts: the government begins efforts to control animals, and eventually turns its sights on humans; modern understandings of hygiene take hold, and dogs come to be treated as pests. In terms of the relationship between humans and animals, is this not a developmental arc that could be traced anywhere? What is unique and characteristic to Cairo in this history?There were also comments on the relationship between humans and animals in other regions. For example, horses are a means of transport in Mongolia, and their role did not change with modernization. On the other hand, while in premodern Japan not much changed in the biology and roles of horsesas farm animals, in the modern period they became an object of modernization efforts and close human management for military purposes.