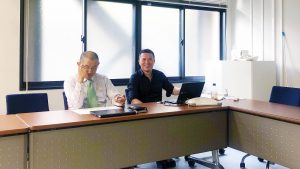 A People’s Constitution focuses on the many and deep influences that the new constitution had on people’s lives when independent India became a constitutional democratic republic. It reveals that these changes were, in the main, brought about not by the elite, but by people belonging to the most marginalized groups in Indian society.

De highlights the provision in the constitution that allowed Indian citizens to petition the Supreme Court for restitution if their fundamental human rights had been violated. At the archives of the Supreme Court in Delhi, De examined documents showing how these petitions came to be taken up by the Court and how they were adjudicated. The book is composed of four chapters, each of which focuses on separate petitions involving, respectively, prohibition of alcohol, commercial regulations, prostitution, and the beef trade. These petitioners ultimately lost their cases, but their losses nonetheless had important and long-lasting consequences. By demonstrating how ordinary people gave meaning to the Indian Constitution—originally set down in English—and made it into an instrument by which to assert their rights, A People’s Constitution brings to light the legal consciousness that awakened in the hearts of ordinary Indians and how the constitution came to permeate into the fabric of society.

The first question was whether petitioners could directly appeal to the Supreme Court. Nomura answered that he was unsure since De relies on documents of the Supreme Court, but that petitioners likely began the process through district courts. Another participant asked from what sources, if ordinary people were bringing these petitions, they got the financial and legal support they surely would have required. Nomura responded that lawyers naturally would have been involved, but precisely what kind of support they provided would be a key point for further discussion. Previous research tended to assume that low rates of literacy among ordinary people meant they could not have understood the constitution, written in English as it was, but in reality ordinary people did initiate court proceedings, so it is important to consider exactly how they brought these interventions into the legal environment and how that influenced the penetration of constitutional consciousness into society. Nomura also noted that historians of India have heretofore tended to evaluate the constitution negatively, as a tool of the elite, and therefore De has made an important contribution to the field in demonstrating that the story is not so simple.