The fifteenth workshop of our project was held at Osaka City University on March 1, 2019.

Presenter: Dr. Hiro Fujimoto (Research Fellow, Urban-Culture Research Center, Osaka City University), who received the program’s exchange fellowship for junior scholars to conduct research at Yale University. His presentation was based on his dissertation, which he submitted to the University of Tokyo in December 2018. 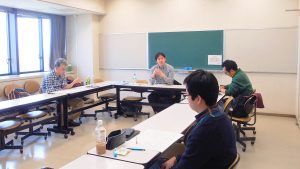 The first half of the presentation was devoted to Fujimoto’s dissertation research. From the early Meiji period, German-style medicine became predominant in Japan, a history which has been thoroughly explored by scholars. However, the history of the American medical missionaries who came to Japan between 1859 and the beginning of the Second World War has been overlooked. Fujimoto conducted a comprehensive study of these missionaries, examining their efforts in medical education and practice and demonstrating the how their roles changed over time. He used primary sources such as annual reports and periodicals of every sect and missionary association in the United States, as well as Christian periodicals and newspapers in Japan.

Fujimoto also introduced his next project, which was to explore the medical work of Japanese Christian physicians. Over the late nineteenth century and the early twentieth century, Japanese professors came to replace imported German professors as the primary providers of medical education in Japan. Likewise, the mainstays of Christian evangelism in Japan shifted from foreign missionaries to Japanese pastors. Building upon his doctoral project, Fujimoto will provide a comprehensive treatment of Christian medical work in Japan by looking at the roles of Japanese Protestant and Catholic physicians. He tentatively outlines four categories of Japanese Christian physicians and proposes to study one representative figure from each in-depth, using their writings and their sectarian organizations’ publications, newpapers, etc. to examine what distinguished their activities. The result, he hopes, will provide an illustration of how Japanese Christian physicians gained independence from foreign missionaries.

First, Fujimoto fielded a question as to the difference between American and German medicine. Medicine in the United States made advances during the Civil War, especially in surgery, and preventive medicine/public health rose to prominence in the years before and after the First World War. By contrast, bacteriological research held pride of place in Germany during these decades.

As for why missionaries studied medicine, Fujimoto noted that select male missionaries received such training because it was thought that it would prove useful in spreading Christianity, especially in regions where modern medical care was new. At the same time, missionary agencies provided an outlet for female doctors, who could not readily find work in the United States due to sexism, and so sought working opportunities abroad.

Another question asked what brought American missionaries to Japan. While some came because they had been born and raised in Japan, as a rule they could not choose where they were posted. There were also some female medical missionaries who cited the lack of women missionaries in Asia as a reason. Lastly, addressing the question of how missionaries learned local languages, Fujimoto explained that they typically began their studies after arriving at their postings.