The nineteenth project workshop—and the third session in the “reading primary sources” series—was held at Osaka City University, from 5:00pm to 7:30pm on Thursday, July 11, 2019. 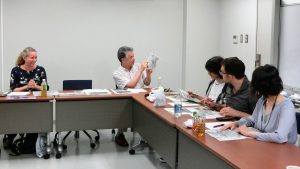 1) a letter of apology from Yasuke of Nakante Village, Ōno County, Echizen Province addressed to Mansaku, a village elder of Kamitsurushima in Kai Province, where the former had purchased some lacquer trees that had in fact been spoken for by another (Yasuke understood that another buyer already paid for them, but offered a higher price because he really wanted lacquer trees)

2) a petition by Mansaku, the Kamitsurushima village elder, addressed to the official Ōno domain residence in Edo. It states that Yomotarō of Nakante village, who stayed in lodgings provided by Mansaku every year on his buying trip, had put money down on some lacquer trees in Makino village in neighboring Sagami Province. Despite this, Yomotarō discovered that Yasuke of Nakante (true name Isuke) subsequently purchased those same trees. Yomotarō and Yasuke argued and eventually the situation was resolved, but Mansaku requested that those beset by such avarice be prevented from entering the village.

Discussion followed a short break. First, since the sources’ language was very difficult to unpack, the group went over Ehlers’s translation, proceeding word by word before turning to discussion of their contents. Opinions were as follows:

It was intriguing that the nature of the commercial transaction—lacquer tappers buying their raw material, that is, lacquer trees—resembled in several respects the purchasing of raw rapeseed by oil pressers. Also noteworthy was the fact that while the dispute involved multiple actors in a complex relationship across multiple locales and so was difficult to resolve, it was finally able to be settled once the headmen of the relevant village got involved. This is important in thinking about the role of the village headman in Edo-period society.

One participant asked why there was so much competition over lacquer trees. Ehlers answered that we know that in this period even Osaka was chronically short of lacquer, reflecting a scarcity in the actual number of trees. The entry of many new lacquer tappers into the market in this period may also have had to do with impoverishment in the villages. This last point was debated, as lacquer tapping required special skills and the trees themselves did not grow everywhere, so tapping was not something one could turn to immediately when facing impoverishment. As such, further investigation would be required.