The co-investigators in our project,Masafumi Kitamura (Professor, Graduate School of Literature and Human Sciences, Osaka City University) ,gave a presentation about his research. 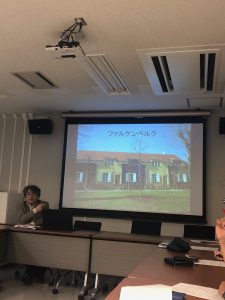 Firstly, Prof. Kitamura reported his business trip to Istanbul on 17-22 March, where he examined Bruno Taut’s house, his tomb and modernist architectures built in 1930s. Next, he talked the Taut’s career. Then, he spoke the research trend about Taut. German researchers have focused on his activities of Germany. Japanese have focused on activities of Japan, although some of them have been interested in activities of Germany. Turkish have focused on activities of Japan. However, Prof. Kitamura’s opinions are as follows: to regard Taut as a person of wandering from one culture and another, and to place him in the stream of Turkish modernization. Then, he explained Taut’s activities of Germany, Japan and Turkey, and reception of modernist architectures in Turkey which aimed at modernization, showing figures of buildings designed by Taut. Finally, he showed three points as outlooks: firstly, to investigate the reception of Turkish modernist architectures in connection with Turkish urban history, then, the image of Istanbul for Taut, lastly, each different aspect of Taut during his stay at Germany, Japan and Turkey.

After a break, discussion was held. About the first question that Taut’s “modernization”, Prof. Kitamura answered that his modernization seemed to be flexible because he changed his thought under his situation, not taking leave of traditional thought. About the second question that architects’ work in the 19th century, he answered that they roughly designed buildings only, but since the 20th century, they made plan in detail and even construction by appearance of reinforced concrete. About the third question that what history of thought Taut should be placed in, he said the influence of World War I, with the preliminary remark “this is one of the prospects”. About the forth question that why Turkey invited Taut, he said that Taut architected educational buildings in Turkey. They wished to add to the value as facility for educating elite designed by foreign architect and intended to form the group of foreign architects. About the fifth question that why Taut build his house in hill unlike wealth built their houses across the sea in Istanbul, he said that this plan was influenced of Taut’s thought which he wished to make something on the top mountain written in his work, “Alpine Architektur”, and he might hope an airy place because of his illness. About the final question that why Turkey commissioned public buildings not residents in redevelopment of 1930s, he suggested that there were gaps between the then residents and modernist architectures required sewerage system and Japan also had the same in 1930s.