The co-investigators in our project,PENG Hao(Associate Professor, Graduate School of Literature and Human Sciences, Osaka City University) ,gave a presentation about his research. 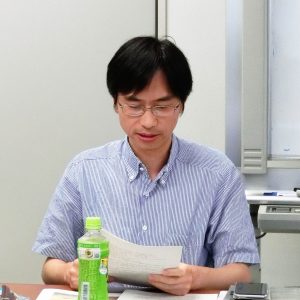 Peng’s research field was early-modern Nagasaki trade. His presentation included two discussion points. The first was about the social relations in the Chinese Residence (tōjinyashiki or tōkan); the second was about the working conditions and organization of the trade-related laborers.

The presentation began with the explanation of the Chinese Residence, which was established in 1689 as an isolation settlement to accommodate the visiting Chinese. Previous studies generally divide the Chinese in the settlement into two classes: merchants and sailors. Peng argued that several figures among the crews—the chief and senior navigators (huozhang and tuogong) and the men in charge of the general affairs (zongguan)—belonged to the middle class due to their income and consumption level. He also demonstrated that the merchants and sailors had different territorial connections dating back to the mid-18th century; most merchants came from Jiangsu and Zhejiang provinces, but the sailors generally came from Fujian province. Peng mentioned that social relations based on class and territorial connection were intertwined in the Chinese Residence society.

The latter part of the presentation focused on trade-related labors and the labor-service agencies. Like other trading ports, Nagasaki required large-scale mobilization of physical labor, particularly for the movement of cargo, which was off-loaded by stevedores (hiyō or hiyatoi) from trading vessels onto sampans (nikogibune) for transport to storehouses ashore. When a junk entered the harbor and trade was permitted, neighborhood officials would hire stevedores through their leaders (hiyō-gashira) and rent sampans via several special agencies (nikogibune-sahainin). The stevedores and sampan sailors often joined other fields like retail or agriculture to earn income. 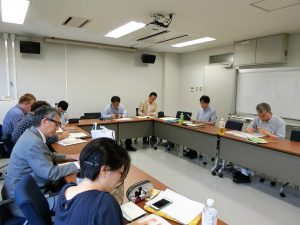 The first question was about the scale of the Chinese Residence. It was explained that the Chinese Residence covered approximately 30,000 m2 and the population was thousands during the junk trade era, but shrunk steadily to hundreds at the beginning of the 18th century. Another question was about the differences between the Dutch trade and the junk trade. The response was two-fold. First, the Dutch merchants were forced to live in the Dejima, an isolated artificial island separate from the Chinese Residence nearby. Second, the neighborhoods of the city undertook most services related to the junk trade. In the Dejima, trade-related services were mainly delivered by the Dutch interpreters (rantsuji) and Dejima compradors (shoshiki-urikominin). The following question was on the role of some essential figures like hiyō-gashira, nikogibune-sahainin, and fune-gashira.

Finally, the discussion shifted to the features of the junk trade in a broad context, especially the perspective of “the trade without empire”. Peng argued that perspective seemed to be based on an attempt at comparing the junk trade with the trade by famous charter companies like the East India Companies. Those companies were prominent in world history, and they seemed to be affected by a kind of European-centered historical view. Peng ended the presentation by explaining that even though there was no diplomatic relationship between the Qing Empire and Tokugawa bakufu, both regimes paid attention to and tried to reap incentives from the junk trade.