The Urban-Culture Research Center (UCRC) at Osaka City University (OCU) is proud to present the tenth issue of UrbanScope, an online, open-access journal. As the name suggests, UrbanScope covers a broad spectrum of urban issues featuring contributions encompassing various perspectives within the humanities.

Special Topic1: The Dismantling of the Status System in Nineteenth-Century Japan

Special Topic2: The Scope of Public Education in Japan and Germany with a Focus on “School Absenteeism” 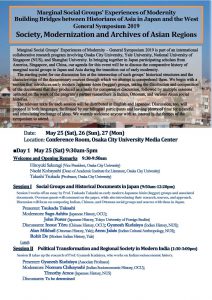 Marginal Social Groups’ Experiences of Modernity – General Symposium 2019 is part of an international collaborative research program involving Osaka City University, Yale University, National University of Singapore (NUS), and Shanghai University. In bringing together in Japan participating scholars from America, Singapore, and China, our agenda for this event will be to discuss the comparative history of marginal social groups in Japan and Asia during the transition out of early modernity.
The starting point for our discussion lies at the intersection of such groups’ historical structures and the characteristics of the documentary sources through which we attempt to comprehend them. We begin with a session that introduces early modern Japanese hinin (beggar) groups, taking the distribution and composition of the documents that they produced as a basis for comparative discussion, followed by multiple sessions centered on the work of the program’s partner researchers in Indian, Ottoman, and various Asian social histories.
The relevant texts for each session will be distributed in English and Japanese. Discussion, too, will proceed in both languages, facilitated by our bilingual participants and leaving plenty of time for a careful and stimulating exchange of ideas. We warmly welcome anyone with an interest in the themes of the symposium to attend.

All inquires may be directed to the main office of Marginal Social Groups’ Experiences of Modernity (a Project for Cultivating Internationally Active Researchers by the Japan Society for the Promotion of Science).
Ashita SAGA（Professor, Osaka City University）
E-mail：CYI03126@nifty.ne.jp

In this two-day workshop we will consider various aspects of the social history of Japan in the Tokugawa and Meiji periods, while also examining the experiences of marginal social groups in the Ottoman Empire in order to develop a broad comparative perspective on the transition to modernity in different parts of Asia.  The morning of the second day of the workshop will also include a session focused on reading Tokugawa period documents from the Beinecke Library.  The event is part of an ongoing collaboration between Yale and Osaka City University.