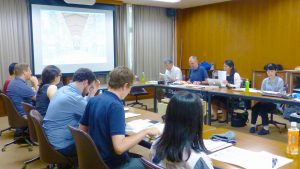 The Second “Reading Primary Sources” Workshop took place on July 14th, 2018 at Osaka City University (OCU). The workshop was put on as a meeting of the Osaka Machibure no Kai, a reading seminar for official town notices organized by OCU’s Early Modern History Research Group. The workshop was joined by guests from Yale University, our partner institute, who gave presentations on the Kyoto komonjo, as important collection of early modern Japanese historical documents at Yale. 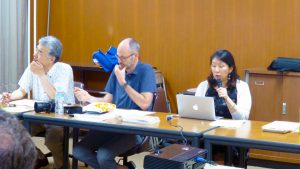 Ms. Nakamura Haruko provided an overview of Yale’s archives of Japanese sources, which are categorized into three groups: 1) the “Japanese Document Collection”, which includes copies of historical manuscripts; 2) the “Special Collection at East Asian Library”, consisting mainly of printed books; and 3) The “Yale Association of Japan Collection”, which contains the most valuable primary sources, including the Kyoto komonjo. Ms. Nakamura also explained about how Prof. Asakawa Kan’ichi assembled these collections of Japanese historical records for Yale University.

Dr. Tak enouchi introduced a primary source called “machidai kaigi,” which dealt with a dispute involving Kyoto’s council of town elders (machidai). This source can help scholars have a better understanding of the Kyoto komonjo . He first described the controversy and explained about the city’s districts (machigumi; composed of neighborhood sub-blocks called chō) and the elders’ council. He then gave an overview of the Kyoto komonjo, which includes the records related to the dispute.

Ms. Nakamura answered to the question why Japanese primary sources are stored separately across Yale’s libraries. She explained that Japanese historical documents not only include Prof. Asakawa’s collection but also other primary sources. The Kyoto komonjo were transferred to the “Yale Association of Japan Collection” due to its high value.

Dr. Takenouchi was asked whether meetings of the elders’ council could be large as those of the districts. He reported that there was only one gathering of the neighborhood groups in Kyoto. One participant commented that there were elder’s groups in Osaka but they were different from ones in Kyoto, so scholars should be careful.

“Document Review: The Fourth Article of Proof of Payment”

Monaghan and D’Amico presented their transcriptions, reading, and translations of the fourth section of a document from the Kyoto komonjo titled “Proof of Payment (sai shōmon)” Using diagrams, they explained how they analyzed the document. The text states that the machigumi accused the elders’ council of inappropriate behavior. As they pointed out, the elders were supposed to deliver summons documents from the office of the Kyoto Magistrate to each neighborhood personally. However, the elders asked their servants to circulate the summons among the districts, which was regarded as a problem. The elders from both upper and lower Kyoto promised that they would do it themselves thereafter.

After the participants corrected mistakes in the transcription, the presenters and participants began a very close examination of the document. It claimed that the circulation of summons by servants delayed their dissemination. As one participant pointed out, this should have been a pretext and the important point was who delivered the summons. The machigumi seemed unwilling to lose face as old neighborhoods (furumachi). As far as can be ascertained from the document, the downtown elder had served as a substitute for an uptown elder. However, there was a conflict between the two elders, and similar conflicts can be found not only in between the machigumi and the elders’ council, but also within the elders’ council. The role of the elders in Kyoto was limited to intermediating between the districts and the Kyoto Magistrate, so their tasks included delivery of notices and summons. By contrast, in Osaka machidai had a larger role in managing the affairs of neighborhoods. Further discussion enabled the participants to elucidate the role of elders’ councils in urban society and to highlight the clear differences between those in Kyoto and Osaka.