The twentieth workshop of our project was held at Osaka City University, from 4:30pm to 7:30pm on Friday, October 25, 2019. This workshop was co-sponsored by Yūkaku shakai (Brothel quarters societies) Study Group.

The Business of Brokering Female Performers and Prostitutes (Geishōgi) in Kanazawa 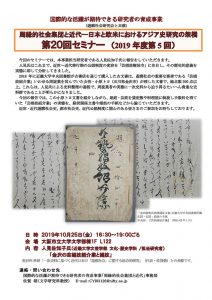 The Kindai University Central Library holds in its archives a collection of “Documents Relating to Female Performers and Prostitutes in Kanazawa” (Kanazawa yūkaku geishōgi kankei bunsho; also known as the “Ohara Documents), which date from 1909 to 1916 and are currently in the process of being organized and catalogued by Prof. Hitomi. It comprises a “List of Introductions of Female Performers and Prostitutes” (Geishōgi shōkaibo; Shōkaibo hereafter) and hundreds of letters from prostitutes addressed to Ohara Toyo, who ran a brokering agency for prostitutes in Kanazawa City, Ishikawa Prefecture. Hitomi presented an analysis of the Shōkaibo and letters written by Irie Hatsue, a prostitute, to Ohara, elucidating the nature and structure of the brokerage business, which operated under the system of public prostitution, as well as examining the working environments prostitutes ended up in.

In the first half of the presentation, Hitomi gave an overview of the Shōkaibo and analyzed the business operations of the brokerages recorded therein, and the situations the women were placed in. The source provides personalized data for how many introductions were made, the associated revenues, the women’s names and birthplaces, and specifics of individual contracts. Relative to the number of introductions, Ohara stood out among her peers in the reach of her operations. In the Shōkaibo we can also observe dates pressed with police officers’ seals, indicating that the police regularly inspected its contents.

The second half of the presentation was devoted to the letters written by Hatsue Irie, one of the prostitutes arranged by Ohara. Focusing on instances of “transferring to another brothel” (sumikae) contained in the letters, Hitomi examined the working conditions of prostitutes and the role of introduction agents. From the Shōkaibo we know that these transfers occurred frequently, and from Irie’s letters we learn that she desired to change brothels. Informing that wish was her older brother’s badgering her time and again for money, which drove her deeper into debt and worsened her working conditions.

Through this analysis of the list and letters, Hitomi concludes that Ohara maintained an extensive operation and close relationships with the women she brokered. The will and agency evinced by Irie in her letters were supporting Ohara’s brokerage business. Hitomi also suggested that dutiful obligation and gratitude (ongi), which Irie expressed towards Ohara in her letters, functioned to conceal the public prostitution system’s structures of oppression.

A participant asked where Ohara’s office was located in Kanazawa city. Hitomi answered that she was probably not situated within the brothel quarter proper, but in an adjacent neighbourhood. As regards the details of brokerage operations, there were cases in which they coordinated with agencies in other prefectures, such when the contract holder (kakaenushi) or the prostitute’s residence (as recorded in the household registry) was outside Ishikawa. Regarding the reason why Ohara came to broker Irie, who was from Tokyo, another participant pointed out that it may have had to do with the fact that her mother’s family had been Kaga domain retainers. As for brothel transfers (sumikae), a participant commented that Irie had gathered an impressive amount of information about conditions in other brothels. There were also several comments about how to position Irie’s letters and rhetoric in the context of “letter-writing culture”.