Zhang Zhihui (Assistant Professor, Department of History, Graduate School of Arts, Shanghai University), who is an overseas co-investigator in our project, gave a presentation about her research. 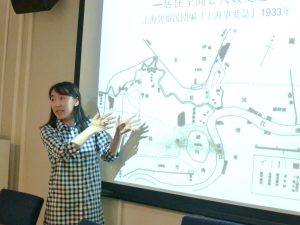 In 1930s, the Japanese settlement was dotted around Hongkou District and along the Suzhou River in Shanghai. The population has increased from 1870 to 1945, but has stagnated for 10 years from 1927 to 1937. Zhang paid attention to the 10 years. She thought that the stagnation was caused by the rise of Chinese nationalism and the intervention of Japanese imperialism against it. With the outbreak of the Shanghai Incident in 1932, Japanese residents deteriorated their lives by increasing anti-Japanese movements and their own hardline attitudes toward Chinese. So, they needed various remedies. One of them was to petition for aid for establishing a clinic to the Foreign Ministry from the Administrative Committee of the Japanese Residents’ Association, the Shanghai Natural Sciences Institute and the Consulate-General of Japan in Shanghai. Zhang paid attention to the bargain over the petitions that the Consulate-General of Japan in Shanghai argued against the refusal of the subsidy by the Foreign Ministry. She also noted that it would be possible to read the living conditions of the petitioners, including their occupation, from the petitions. According to the tax payment in 1933, one quarter of all households were untaxed, and they could not afford to an individual physician because of the expensive medical expenses. Therefore, a clinic for residents was required as part of the rescue project. So, on July 1, 1934, a clinic was established by the Japanese Residents’ Association. The expenditure of the clinic was 2 times higher than its income, and the most of the income was subsidies from the Japanese Government and the Shanghai Municipal Council. The establishment of the clinic was a joint project of the upper residents, and the job function of the Japanese Residents’ Association was expanded. 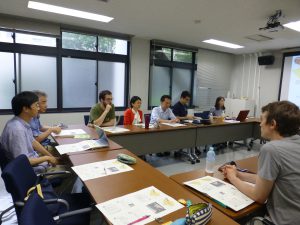 Firstly, there were questions about the structure of the Japanese Residents’ Association of Shanghai and the Shanghai Municipal Council, the settlement for Japanese in the Shanghai international settlement, and the currency circulated in Shanghai in the 1930s. Next, there were questions about the positioning of a clinic in Shanghai, and the relationship between the clinic and the Dōjinkai hospital in Shanghai. The hospital was planned to establish in order to examine Chinese patients and to fight against Western powers. On the other hand, the clinic was established in order to support Japanese residents’ living after the outbreak of the Shanghai Incident. So, both facilities had different objectives and purposes. There was an opinion about the interpretation of historical materials, for example, “the significance of social policy” and “the purpose of universal salvation” in the clinic’s establishment philosophies. Moreover, regarding the economic situation of the clinic, it was mentioned that the compensation for the deficit was covered by the Foreign Ministry and the Japanese Residents’ Association. A participant said that the emergency rescue project by the Association were welfare, while the Dōjinkai hospital in Shanghai was not.